The Career Surveyor™ is a comprehensive, scientifically validated career test that will help you discover the best career path for you. You'll discover:

To get personalized career ideas and individual advice, the Career Surveyor™ will help you choose a path to keep you motivated and successful for many years to come.

Building careers are those that involve mechanics and construction, working with machines, or using physical skills. Builders are often attracted to careers in the military or law enforcement, construction, mechanics, and athletics.

Thinking careers are those that involve research, analysis, and solving abstract or theoretical problems. Thinkers are often attracted to careers in the sciences, computers and technology, mathematics, and medicine.

Your primary interest area is Creating, which means you are primarily interested in imagination, self-expression, and artistic experience. Creators enjoy drama, fine arts, music, and creative writing. They like to work with visual elements such as forms, colors, and patterns.

Helping careers are those that involve assisting, teaching, or taking care of other people. Helpers are often attracted to careers in education, counseling, health care, social service, and human resources.

Persuading careers are those that involve leading, influencing, or managing others. Persuaders are often attracted to careers in business, management, sales, retail, and entrepreneurship.

Organizing careers are those that involve managing data, files, and processes. Organizers are often attracted to careers in accounting, computers and information systems, administration, and office management.

To complete the Career Surveyor Test, you -

Do not worry about whether you have the skills or training to do an activity, or how much money you might make.

On the Career Surveyor™ test, simply think about whether you would enjoy doing it or not. 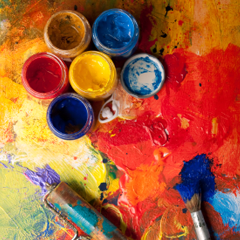 Your primary interest area is Creating, which means you are primarily interested in imagination, self-expression, and artistic experience.

Creators enjoy drama, fine arts, music, and creative writing. They like to work with visual elements such as forms, colors, and patterns.

Creators like an unstructured work environment where they can be free to express their individuality. They usually like to avoid work settings with a lot of strict rules or standard procedures that must be followed.

Creators like their work best when they can think outside the box and put their own personal spin on what they do. As a Creator, your primary career goal will be to find a job where you can use your imagination and solve creative problems in a unique and original way.

The Career Surveyor shows you all the careers that you might consider, organized by primary interest area. Then, you will see the careers that are projected to grow most quickly in the future, and those with the highest average yearly earnings.

As you browse through the  Career Surveyor™ lists of careers, make sure to bookmark the ones that interest you using the icon to the left of each career listing. Bookmarking a career saves it to your saved careers list so you can easily find it later.

Announcers present music, news, and sports and may provide commentary or interview guests about these topics or other important events. Some act as masters of ceremonies (emcees) or disc jockeys (DJs) at weddings, parties, or clubs.

Radio and television announcers typically do the following:

Announcers present music, news, and sports and may provide commentary or interview guests about these topics or other important events. Some act as masters of ceremonies (emcees) or disc jockeys (DJs) at weddings, parties, or clubs.

Radio and television announcers typically do the following:

Radio and television announcers present music or the news and comment on important current events.  Announcers are expected to be up to date with current events or a specific field, such as politics or sports, so that they can comment on these issues during their programs.

Radio and television announcers also may be responsible for other aspects of television or radio broadcasting. They may operate studio equipment, sell commercial time to advertisers, or produce advertisements and other recorded material.

The following are examples of types of announcers:

DJs broadcast music for radio stations. They typically specialize in one kind of music genre and announce selections as they air them.

Talk show hosts may work in radio or television and specialize in a certain area of interest, such as politics, personal finance, sports, or health. They contribute to the preparation of program content, interview guests, and discuss issues with viewers, listeners, or the studio or radio audience.

Public address system and other announcers held about 10,700 jobs in 2012. About 32 percent worked in the arts, entertainment, and recreation industry, and about 25 percent were self-employed.

Although most announcers work full time, many work part time.

Many radio and television stations are on air 24 hours a day. Some announcers present early morning shows, when most people are getting ready for work or commuting. Others do late-night programs.

Educational requirements for announcers vary. Radio and television announcers typically have a bachelor’s degree in journalism, broadcasting, or communications, along with work experience gained from working at their college radio or television station.

College broadcasting programs offer courses, such as voice and diction, to help students improve their vocal qualities. In addition, these programs prepare students to work with the computer equipment and software used at radio and television studios.

Public address system and other announcers typically need short-term on-the-job training upon being hired. This training allows these announcers to become familiar with the equipment they will be using during sporting and entertainment events.

Interpersonal skills. Radio and television announcers must be able to interview guests and answer phone calls on air. Party disc jockeys (DJs) and emcees should be comfortable working with clients to plan entertainment options.

Employment of announcers is projected to show little or no change from 2012 to 2022.

For more information about the broadcasting industry, in which many announcers are employed, visit National Association of Broadcasters

Click on the link to start on the Career Surveyor Test.